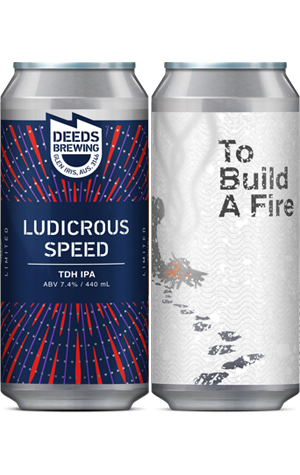 When Deeds Brewing – well known for the speed of their limited release schedule and the often extravagant nature of such beers – decide to name a beer Ludicrous Speed, you have to wonder just how far they're pushing the boat out. Yet the beer is relatively normal, way short of the dry-hopping rates or alcohol content of many past (and no doubt future) releases.

Look, we're not saying it's a common or garden pale ale – it still features a dry-hopping rate of 21g/l of Citra, Galaxy, Motueka and a little Sabro, and measures 7.4 percent ABV – but it's far from ludicrous. Extreme haze prevents light getting through like a pale yellow stout, while there's tropi-mango, sweet grapefruit and citrus rind aplenty, and some fleshy, textural grip that deposits a little oily bitterness in its wake.

To Build A Fire landed at Crafty Towers in a rather timely manner, not just because there's another cold snap covering much of the country but also because I've become rather obsessed with fires and their role within communities throughout history while on the road. What's more, Build A Fire has become a bit of a family favourite (when we can get Cotton Eye Joe and Minions covers off the kids' playlist, at least).

Even without studying the can, you know this is a very sizeable stout – one aged in bourbon barrels and flavoured with hazelnuts and cacao – with both sweet alcohol and reminders of the barrels' former tenant rising from a solid mahogany drop with the darkest of brown heads. There's an Amaretto like nutty / marzipan edge to the dense chocolate fudge, toasted coconut and molasses too within an undeniably boozy, intensely bittersweet beer akin to an OTT, brandy-soaked, festive dessert.

A downside of the recent bout of lockdown-dodging was missing out on two other big IPAs from Deeds when they were canned a few weeks ago. If you can track down some Choose Your Own Adventure, you'll find an 8.9 percent ABV single hop Mosaic DIPA that's all fairy floss and creamy tropical curd delivered with a sticky intensity, restrained bitterness, and far-from-restrained hop flavours. Temporal Shift is bigger still, a 9.5 percent ABV triple IPA featuring Mosaic, Ekuanot, Idaho 7, Eclipse, Simcoe Cryo and Sabro. Don't bother trying to pick the hops apart; if you're into full-bodied, creamy, high octane, fruit salad hazies, however, then the time is right for a trip to the bottlo.