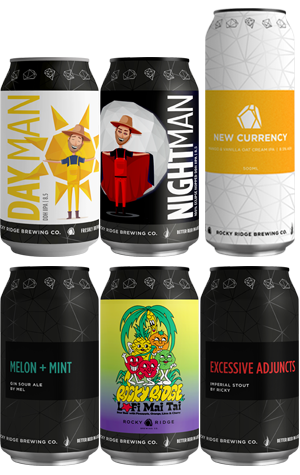 As is often the way in the Rocky Ridge camp, the month of October brings a slew of fresh beers, released in quick succession and spanning a range of styles.

For those who like their beers hoppy, the returning Day Man (8.5%) is a DDH IIPA that showcases balance and tropical characteristics, while Nightman (8.5%) is a similar effort but brewed with nothing but Eclipse hops, a move that yields a more dominant citrus and pine profile. New Currency (8.5%), on the other hand, is loaded with sticky, sweet mango nectar and, boosted with lactose and vanilla, it’s a boldly flavoured imperial NEIPA suited to the ensuing warm weather.

To round out the lengthy list is Excessive Adjuncts by Ricky. Designed by sales and marketing boss Ricky Watt, it’s a tip of the hat to the peak hype beers that are typically loaded with an excess of ingredients not often found in beer. Peanuts, oak, coconut, vanilla, cocoa, lactose and banana all feature in this monster 14 percent ABV imperial stout that is as rich and decadent as you'd expect yet surprisingly retains a reasonable level of drinkability.