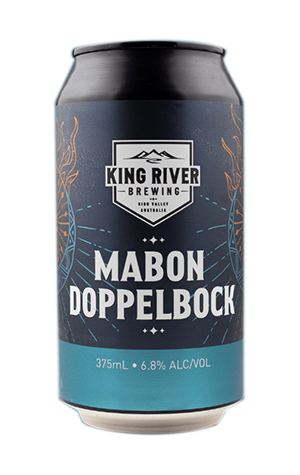 Even in a busy field of brewers, King River Brewing’s cofounder and head brewer Nathan Munt is a man who truly loves German beers. Typically the High Country brewery will always be pouring a selection of German - and Belgian for that matter - styles and in a normal year, a joyous point in spring is the brewery’s annual Muntoberfest celebrations. Mabon Doppelbock is a beer inspired by Europe’s old ways, with the strong lager not just paying homage to one often enjoyed by monks during lent but named after the Mabon pagan harvest festivals.

You can easily see how such a beer might be able to help you skip a meal too, as Mabon is very much bread in liquid form and brings to mind a fluffy loaf of brioche with not just its flavours but also with its bright white head. Along with those sweet bready notes, there are further levels of caramel and brown sugar and a lasting noble hop spiciness to ensure the rich lager stays nicely balanced.