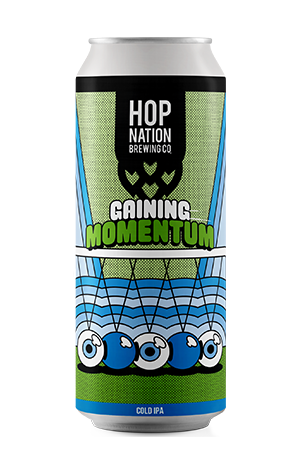 A few weeks on from taking on one of the newest IPA trends out of the States, Hop Nation have turned their eyes (quite literally if the can is anything to go by) to another with their first Cold IPA. The name Gaining Momentum quite likely refers to how much the Cold IPA trend - which you can read about here - appears to be taking off but considering it’s been released a day before Melbourne’s grand reopening, you can also think of it as an offering to the gods of lockdown that this one might be the last and breweries and bars in the city can finally enjoy a bit of momentum of their own.

As for the beer at hand, it’s double-dry-hopped with Chinook, Simcoe Cryo and Ekuanot Cryo, which start the beer in the tropical territory of papaw and melon and then lets it move to a more traditional West Coast realm of dank pine and some floral notes. Unlike Hop Nation’s many hazy IPAs, you’ll find Gaining Momentum to be brilliantly clear, crisp on the palate and bringing with it substantial bitterness.