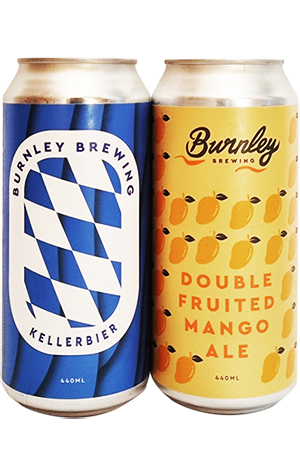 As October 2021 approaches its end, Burnley Brewing say goodbye to their celebration of Oktoberfest two times over. First off, they’ve released their final Oktoberfest beer and celebratory pack with Kellerbier and Zusammengehörigkeitsgefühl Part Three. The latter of those comes on the back of popular demand from the first two packs, which champion the feeling of togetherness, and contain the Kellerbier itself, along with a range of other Reinheitsgebot appropriate beers from the brewery.

Kellerbier itself is styled on the earliest lagers and literally translates to cellar beer – the sort enjoyed straight from the tanks in the cellars of Bavaria. It’s cloudy and golden enough to be a hazy pale ale and even has a full mouthfeel associated with beers spiked with oats. Other than that, however, it couldn’t be further from such beers, instead coming across clean, spicy, with notes of sulphur before finishing crisp and leaving you wanting more.

Then there’s a beer that throws the German Purity Law straight out the window and hotfoots it to a tropical location. Double Fruited Mango Ale is a beer made for the warm days of summer and, while we might be in spring at the time of writing, does anyone else feel that supermarkets in Australia seem to be pushing mangoes earlier and earlier each year?

A lot of people get annoyed at hot cross buns appearing in shops straight after Christmas but surely the real crime is early season mangoes being pushed on shoppers that aren’t nearly as full flavoured as they should be. You could say you’d even be better off drinking a “Double Fruited” beer, for this hazy little number is packed to the brim with fresh mango flavour and provides a fulsome enough body that it's not too far from biting into the skin of one.