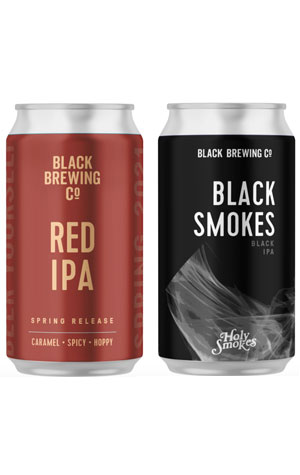 Red IPAs aren't released too often – even though we know many beer fanciers who'd love to see more of them on the market – but they're a popular choice for brewers looking to bridge the gap between sessionable summer drinks and heavier winter offerings (or vice-versa). It's where Black Brewing have headed for their spring 2021 release, with Red IPA actually a red rye IPA, and one that leans more into its maltier than hoppier side. With plenty of toffee and some spicy rye awaiting you in this rusty-coloured drop, underpinned by a soft, drying, spicy bitterness, it's one for fans of American ambers or hoppy reds.

Leaving the brewery around the same time is Black Smokes, a collaboration with Holy Smokes that's seen them add smoky roasted mesquite malts to a black IPA based around HPA's latest Aussie hop, Eclipse. The latter is known for its vibrant mandarin character but here, in cahoots with such specialty malts, it contributes instead to a bouquet of festive spices. Don't be fooled by the talk of "sweet caramel" on the labels either, as it's somewhat deeper and darker than that, with this ruby-tinged dark brown drop melding dried citrus rind, cocoa and a spicy, tar like perfume on the nose with dark treacle and a drying, roasted bitterness on the palate, all suggesting you'd want to pair it with one of Holy Smokes' heartier dishes.