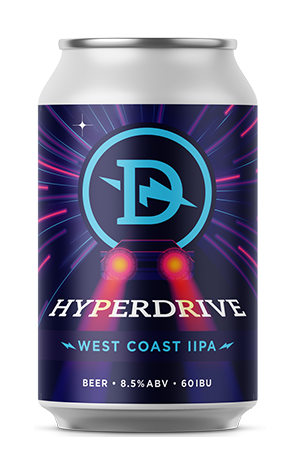 It seems there can never be enough hops in Dainton’s core range, with the Melbourne brewery including multiple hazies in their lineup and adding the West Coast IPA, Overdrive, to their core range in October 2020. It’s a beer that’s served them well too, picking up a gold medal at The Indies in 2020, while also becoming a favourite of the brew crew and Dainton fans seeking out pine and bitterness. To celebrate that beer turning one, Dainton have created a limited release big sibling in Hyperdrive, which sees the beer charge full throttle into double West Coast territory.

Pouring a deep orange with an ABV of 8.5 percent, an equally fitting name for the beer would be hyperdank, with this bold release absolutely packed to the brim with pine, resin and some wider floral and earthy flavours. Along with that, there’s a level of sherbet citrus, a touch of sweetness from the booze, and a bitterness that kicks into gear immediately yet softens as the ride continues and your palate adjusts. Enjoy the ride!