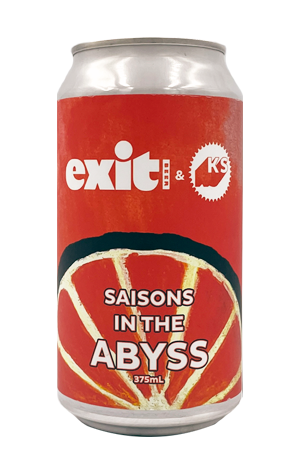 It's nice to have one's memory jolted once in a while, especially when it's to take you back to a fun little period in the evolution of modern Aussie craft beer. In the case of Saisons In The Abyss, it's to the time when Shawn Sherlock (now FogHorn) and Ian Watson (now at Black Hops) were in cahoots at Murray's (yes, Sherlock and Watson) and knocking out all manner of big imperial stouts, Belgians and barleywines. One of the biggest was their Slayer-referencing Seasons The The Abyss, an 11.3 percent ABV imperial stout brewed with a farmhouse yeast that put figurative hairs on your chest.

The only common theme between that beer of a decade ago and this collab between Exit and Killer Sprocket – other than the Slayer reference – is the use of a farmhouse yeast strain, with Saisons In The Abyss a saison brewed with blood orange extract and dried orange peel. It has a vibrancy in the glass and, just as you’re welcoming the saison's peppery bouquet into your nostrils, up pops a flash of blood orange in equally vibrant fashion. The fruit adds a pithy, fleshy juiciness atop the beer’s prickly spices and quenching dryness in a fashion that leaves you feeling like the essence of a saison has been imbued into an actual blood orange as much as the other way round.