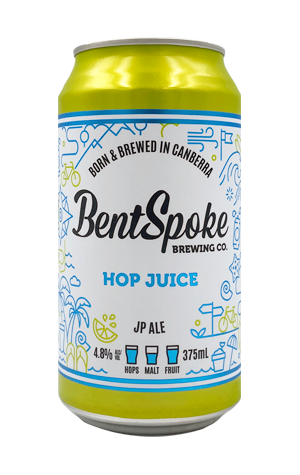 Over the past couple of years, it's been around about now that BentSpoke have released an easy-going fruit gose for summer, with the punsome How's It Gosen? coming in tropical and cherry iterations. Whether it's a sign of the times, or BentSpoke's brewers just fancying a change, or merely a precursor for another gose, their pre-summer Drifter release for 2021 is instead a JPA – with their addition to the beer world's abbreviations short for Juicy Pale Ale.

There are plenty of beers around at the minute with "juicy" in their name, style or description, although in this case there's actual fruit in the mix too: mango and tangerine to augment the juiciness created by Sabro, Ekuanot, HBC 472 and Cryo Pop hops.

There's no mistaking the mango racing to the front of the peloton in this peachy coloured pale, complete with a fast-dissipating head that acts is a precursor to a beer with lower-than-usual carbonation, which I guess makes it more like an actual juice. There’s some citric liveliness on the nose contributing a little grip on the palate, then acting alongside a touch of resinous bitterness to create a tangy dryness as Hop Juice crosses the line, by which time mango's early dash has been reined in by the hunting pack fresh from the fruit aisle.