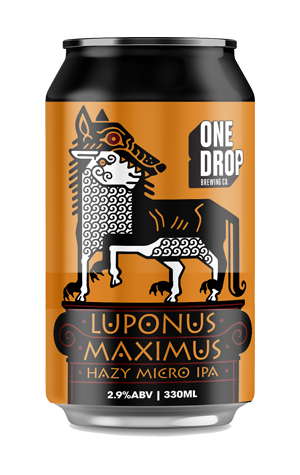 Dry-hopping rates have soared over the past few years, and certain beer styles are trending to require such high amounts of hop character that brewers need hop technologies that can deliver that character without unpleasant side effects.

Lupomax hop pellets, which contain concentrated lupulin with less vegetation, are one such technology. And to celebrate the innovation, Hop Products Australia are joining hands with Beer Cartel to sing the praises of Lupomax via a mixed 12-pack showcasing beers from different breweries.

Unsurprisingly, nine of the twelve beers are IPAs† coming in at six percent ABV or more. If you’re playing with concentrated hop pellets, you may as well go big or go home, right?

Surprisingly, however, the brewery that decided to think small is One Drop. Their experimentation went in the other direction – can we use this intense hop character to boost a low alcohol beer? And, of course, the answer is a resounding yes.

Calling it a "hazy micro IPA", their Luponus Maximus is a 2.9 percent powerhouse that uses Amarillo, Citra, Huell Melon and Sabro – all in Lupomax form. It's pumping with fresh melon and sweet lemon candy, with a coconut bitterness sliding over the tongue right through to the end.

It's got aroma. It's got flavour. It's got mouthfeel. It’s got bitterness. If you drank it blind you’d call it a tasty hazy pale, and you’d never guess it was so low in alcohol. Which of course One Drop were pointing to the whole time with the rockin’ can art of a sheep in wolf’s clothing.

†Officially one of them is a "strong pale ale", but an IPA by any other name, et cetera.

NB Members of our beer club, The Crafty Cabal can enter a competition to win one of the Lupomax packs.