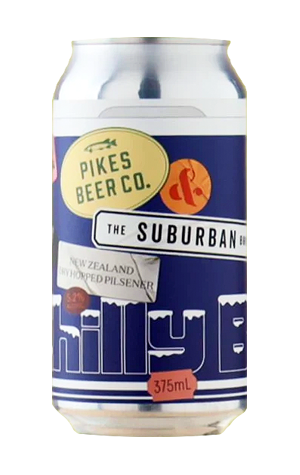 When it comes to language, New Zealanders often stand further apart from us than the expanse of water separating the two countries. They call thongs jandals; an esky is called a chilly bin. And, while Aussies like to lay claim to Russell Crowe, Phar Lap and pavlova, there are no immediate plans to weave these and other terms into our lexicon. Clearly, however, the teams at Pikes and Suburban see the funny side of these differences, naming their limited release collab Chilly Bin.

The beer, a 5.2 percent pilsener laden with NZ Nelson Sauvin, Green Bullet and Taiheke hops, pours a bright straw colour and brilliantly clear in true Bohemian fashion. But elsewhere it deviates from style as classic NZ hop aromas take over: sauvignon blanc mixed with some floral and a little passionfruit character, elements that are joined by honeydew to taste. It has a medium light mouthfeel that carries a certain crisp dryness that works well with the sauv blanc and would match perfectly with a healthy serve of fush and chups.