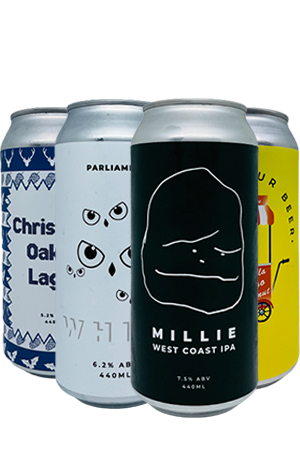 As the end of 2021 fast approaches, Melbourne’s Braeside Brewing have once again looked to ensure they have a beer for all the moments summer might offer. Starting with the lightest of them all we have Christmas Oaked Lager, a 5.2 percent ABV European lager conditioned on French oak and lagered for ten weeks. Packed inside a can that resembles a Christmas sweater that’s been run through an early 90s video game, it’s a lager that lies close to being a Helles with a distinct twist, containing a mix of bready notes and some biscuit from the malts plus a building spice and floral flavour and oaky vanilla finish.

Taking things up a notch is Millie, a 7.5 percent ABV West Coast IPA inspired by one of the Braeside kids drawing their parent with a bitter face. There’s little to worry about here though if you enjoy classic West Coasts; the combination of Columbus, Amarillo and Simcoe provide pithy grapefruit, pine, resin and – maybe like the picture itself – a bitterness that encompasses and surrounds the beer.

Keeping things on the West Coast while also travelling to Europe, Parliament is a 6.2 percent ABV white IPA with one foot in Belgium and the other in America, featuring Bravo, Citra, Amarillo and Cascade hops along with coriander and orange peel. It means that alongside the clear hits of spice, cloves and pepperiness, you’ll also be met by an extra dose of citrus which flickers between mandarin and orange.

Finally, let’s finish in the most appropriate place: dessert. Gelato Vanilla Mango Coconut Sour is a 6 percent ABV Berliner weisse made with mango purée, vanilla and lactose that's been conditioned on toasted coconut. It means that, while there’s a clean sour edge to the beer, it’s also heavy on a creaminess that blends with sherbety-sweet tropical fruit.