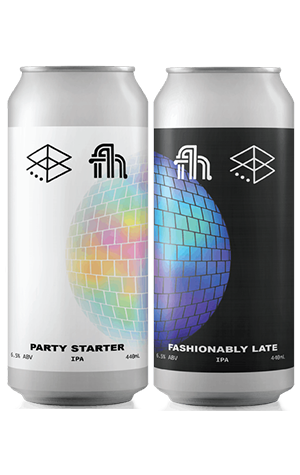 True to their motto of "forever exploring, forever evolving", new Range releases often feature variation on a style. A previous recipe is taken, tweaked a little with a new process, new combination of hops or other ingredients, and a new beer is released only for – and we're assuming this based on the frequency of beers – the whole process to begin again immediately. That ethos of exploration seems perfectly captured in this collaboration made with the New Zealand hop growers at Freestyle Hops. Both IPAs use Nelson Sauvin and Motueka and are identical in their recipe and process with one key difference separating them: the time when the hops were harvested.

Party Starter uses Nelson Sauvin picked on March 23 and 24 and Motueka that was harvested on the first two days of the month, with the combination swerving between lime, lychee, white grapes, pear and a softer touch of passionfruit. Like its sibling, those hop flavours all sit atop a creamy, soft and luscious malt body that complements the beer's juicy nature.

For Late To The Party, its Nelson was harvested from April 2 to April 4, while the Motueka came in on March 17 and 18 and it's probably best to think of the siblings as being separated by a sharp fruit note versus a more mellow one. And it's Late that's the more mellow of the two, with the beer providing rich, ripe melon, papaya, some further lime and a distinctly dank note that's also quite grassy and oily. In other words, while both beers might have started life together, look closely, enjoy them together and you'll find quite clear points that separate them.

Also fresh out from Range at the time of writing are a new DDH pale named Hold Music and collaboration with Brisbane's live music venue The Triffid, And The Nominees Are.