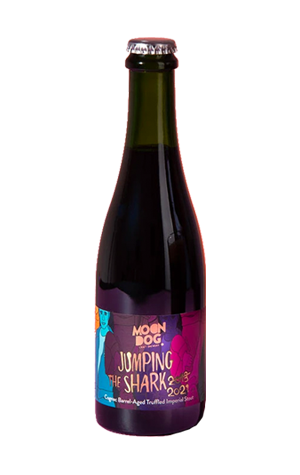 By the time Moon Dog released their first Jumping The Shark beer in 2013, way back before such grandiose ideas as Moon Dog World had come along, they already had a reputation as beer world pranksters for whom nothing was off limits. So giving a beer such a name, against a backdrop of frequently daft beers with even dafter names and labels, demanded they really pushed the boat (towing The Fonz) out a long, long way. They did so by creating a barrel-aged imperial stout with an ABV of more than 15 percent and lobbing in several thousand dollars of rare Tasmanian truffles for good measure.

Not only did it manage to exceed all previous Moon Dog releases in terms of concept, but it arguably exceeded all of them in execution too, even going on to pick up a gold medal at the next Australian International Beer Awards. Ten years on from releasing their first beers, they chose to revisit the original Jumping The Shark, again utilising Cognac barrels, hitting 15.6 percent ABV, and unearthing more truffles. Given the time between brews and the factors at play, not to mention the fond memories many beer geeks will have of the first beer, it's quite an undertaking. So, how did they get on?

As I texted co-founder Josh Uljans on sampling the new beer a couple of weeks back: "The legend remains intact."

The 2021 vintage pours with little in the way of head but plenty of viscosity, and has plenty to wade into: liquorice and Cognac richness, dark fruits galore, the very essence of chocolate, and a spice / perfume that belongs in some Northern European grandma’s special cake recipe. It's boozy but with the booze forming part of the flavour rather than protruding with sharp edges – albeit warming over a few sips almost like a whisky.

It's a truly humongous imperial stout that presents well even at this young age and does nothing to impeach the memory of its forebear for those of us crafties long enough in the tooth to have loved it first time around.