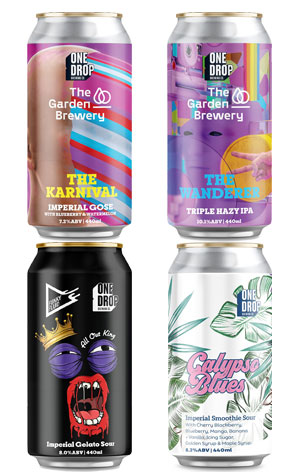 I’ve got a riddle for you. You drink three Aussie collabs with European brewers, three nutso fruited sours, three beers eight percent ABV or higher… and yet you’ve only consumed four beers in total. How?

Head brewer Nick was brewing at The Garden in Croatia when One Drop headhunted him. But The Garden have no hard feelings; in fact, they have such a soft spot for their first brewer that he was one of the people they sought to collaborate with when it came time to celebrate their fifth birthday.

The celebration kicks off with The Karnival, an imperial gose stuffed with fresh watermelon juice, blueberry juice and whole blueberries. The pink of watermelon and purple of blueberries join together to make a… well, a pinky-purple colour. But when it comes to flavour, the watermelon does the lion’s share of the work, adding its super fresh vibrancy to the sea salt and tartness of the base beer. Expect some face puckering.

The next beer, The Wanderer, is surely a reference to wandering Nick himself. It’s a triple hazy IPA that shows off a bunch of the big hazy ingredients and processes Nick has in his repertoire: One Drop’s signature hazy yeast, a globetrotting hop bill of Sabro, Amarillo, Galaxy, and Nelson Sauvin, a triple-dose of dip-hopping, and more oats than Uncle Toby can fit into a red box. Together, these elements make up a glass of tropical nectar – The Wanderer is opaque (like nectar), thick in the mouth (like nectar), heaving with sweet fruit flavours (like nectar), and easy to drink by the gulp (also like nectar, but as a general rule, unlike triple IPAs).

That’s the end of One Drop’s collabs with a Croatian brewery for the time being. Now for something totally different… One Drop’s collab with a Polish brewery. The Botany crew teamed up with Funky Fluid, a brewery in Warsaw, to make All Out King Imperial Gelato Sour.

My initial reaction was to say: "Classic One Drop", but it turns out Funky Fluid makes ridiculous gelato beers on the regular, so I guess the two breweries egged each other on in their ridiculosity. They also went and got their can design done by an Indonesian artist, since Indonesia is kind of between Warsaw and Sydney, but that’s actually the most mundane aspect of this beer.

I recently heard someone refer to strawberry Nesquik as "pink milk" and I will from now on never call it anything else. I tell you this because when you bury your nose in a glass of All Out King, it smells exactly like pink milk. From the first sip this syrupy goo – which is, true to its name, thick enough to drink like melted gelato – is simultaneously sweet as all get-out and charged with sourness, and it’s a little while before the initial hit of pink milk morphs into richer, darker red fruit flavours.

It’s worth pointing out at this point that All Out King doesn’t contain strawberries. What it does contain, however, is cherry, boysenberry, Australian shiraz grapes, vanilla, icing sugar, lactose, and Michalki Biale Polish candies. Because… why not?

We now come to the final page of this tome: Calypso Blues. But since this is just a traditional imperial smoothie sour with blackberry, blueberry, cherry, mango, banana, oats, vanilla, lactose, icing sugar, golden syrup and maple syrup, there’s nothing here that you haven’t already had a thousand times before at your local pub. This cloudy wine-red berry-yoghurt-y beer is probably what your grandaddy drank by the pint, washing down a meat pie with the refreshing sweet-sour tsunami after a hard day’s work. Barely worth a mention, really.