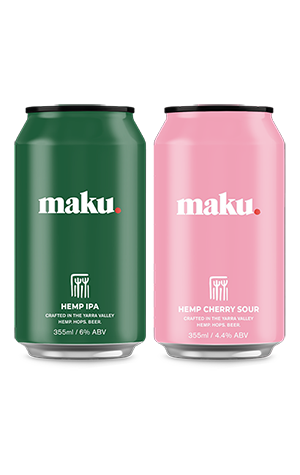 The Maku range of beers is part of the wider Public Brewery family, with the Melbourne operation launching the offshoot in 2019 and using it to largely focus on hops’ close cousin, hemp (aside from their very classic Czech pilsner that is). Just in the time for summer 2021, the brewery has released two more limited release Maku beers, with both showcasing the way hemp changes styles there's a good chance you know well.

Starting with Hemp IPA, the beer features Columbus and Amarillo, with those quintessentially American hops seeming to combine with the hemp for something of a trans-Atlantic journey. Along with the citrusy grapefruit, there’s a slight sweetness and a biscuity quality, while a distinct nuttiness make it closer to an English IPA than a West Coast, even with the beer finishing quite dry. Having said that, there is a bit of pine with the hops, so you could just as well say it's an ESB tweaked by using American hops.

Joining that beer is Cherry Sour, which pours a stunning pink and, in doing so, mimics cordial or soft drink quite impressively, only being a few shades darker than the beer’s vibrant can. From the aroma, rhubarb springs to mind before the cherry and raspberry fruits crash through with the beer’s acidity but, once again, there's a distinct difference to many fruited kettle sours. Underlying it all is a nuttiness that creates a nougat flavour alongside elements of cherry lollies.