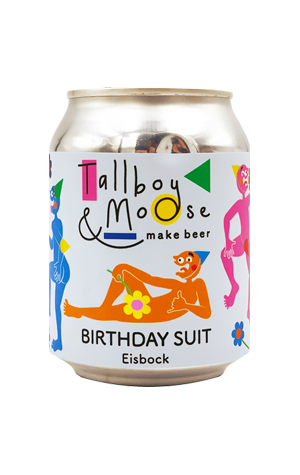 A fair bit of planning went into the beer to mark Tallboy & Moose's fifth birthday; five months of planning to be precise. Normally, you might expect that to mean they'd prepared a barrel-aged beer, but you'd be wrong. Birthday Suit spent that time in stainless, doing more than just conditioning; it was freeze distilled – a means of raising the alcohol content and intensity of a beer – no less than five times, turning the original 10 percent ABV liquid into an Eisbock twice the size, a process that involved a complete overhaul of the chilling system at the Preston brewpub. And, while the finished beer is undeniably huuuuuge, they have at least presented it in mini 250ml cans, complete with colourful sprites in their birthday suits.

It feels like an appropriate sort of beer with which to celebrate a milestone for Tallboy & Moose; Eisbocks are popular endeavours for ambitious homebrewers and the brewery founders brought a homespun approach to the Melbourne beer scene when launching (and prior to that as We Make Beer). They've come a long way since, without abandoning their passion for experimentation, with Birthday Suit pouring with low carbonation and unveiling a dense dark, dried fruitiness reminiscent of Belgian strong dark ales, flavours of old cola, dark treacle, muscovado sugar, dates, a hint of sweet coffee. What heat there is rises slowly, which raises another possibility behind the release in small cans: it's in case you want a second (and an early night).

Order as part of their birthday packs here