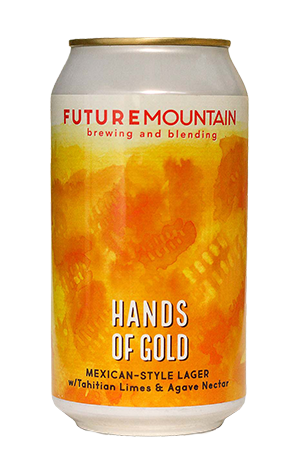 Summer starts today and Future Mountain have a special beer to mark its arrival. But it's more than that keeping the team at the Melbourne brewery and blendery smiling. Last week saw them take out Champion Brewpub at The Indies – and anyone who tuned in would have seen the joy and speechlessness spread across the faces of the crew.

But winning a major trophy doesn’t mean you can rest on your laurels, and Future Mountain have a big launch with Hands Of Gold, a Mexican style lager. It’s the third time the brewery have released the unfiltered lager, which is brewed with Taiheke hops, Tahitian limes from the Yarra Valley, and agave nectar, while the malt bill is made with 45 percent corn. Previous releases have been in keg only but 2021 sees it arrive in cans – a first for the brewery.

That’s not to say we can expect a slowdown in the beers appearing in bottles but a can of lager seems an appropriate way to welcome summer – and so too does launching it at multiple Melbourne venues at once, with the lucky 13 listed below. As for the beer at hand, it couldn't be more accurately named given the way it sparkles like glistening gold when poured, while it's incredibly easy-drinking, crisp, lean and features a substantial zesty citrus hit from the lime, a grainy character from the corn and a floral and slightly savoury finish.

In other words, it's a beer you might like to kick back in the sun to enjoy, which the team at Future Mountain certainly deserve to do at the moment.