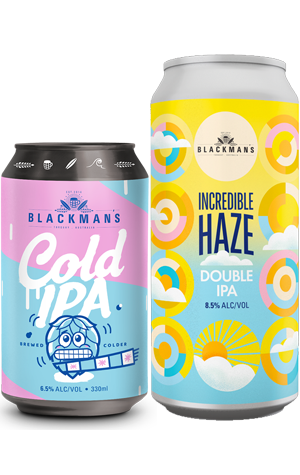 Looks like there's been a fire sale on pastel colours in the Torquay area recently as two rather different modern IPAs make their pitch for a space in your fridge this summer. Cold IPA was first released in spring but has proven popular enough to get a second run, and given it featured in our first post-lockdowns four, five and six blind tasting (results on the site December 6) we figure it should get a run on the site.

For those new to the new IPA variant, you can read more here. In simplest terms, cold IPAs are fermented with a lager yeast but at a warmer temperature more suited to an ale yeast, and in combination with a stripped back pale malt bill (sometimes with rice or corn in the mix) designed to offer a lean, clean, crisp base for hops to shine. They're close cousins to IPLs, which Blackman's brew more than most, with this beer pouring pale gold and hazy and showcasing citrus and stone fruit hops. It's clean but actually pretty rounded on the palate (leading our blind tasting judges to comment on its similarity to a hazy IPA) where there’s a citrusy sweetness and a little passionfruit tang interwoven with the not insignificant bitterness.

Stepping this up a notch or two is Incredible Haze, a double IPA which has that increasingly familiar tropical sponge biscuit thing going on courtesy of, among other things, what the brewers call "extraordinary amounts of Citra Cryo, Strata and Loral hops". The haze isn’t necessarily incredible in its density but is still opaque, while the beer is fruity with a pithy edge to the finish, and with alcohol woven throughout proceedings, adding a little warmth without distracting from the fulsome tropical vibes.