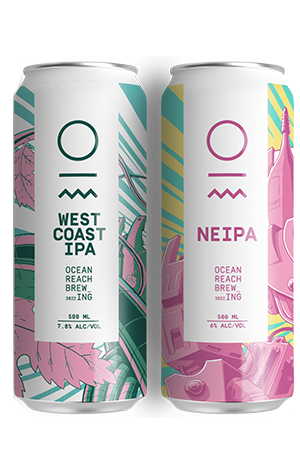 After more than six months, Ocean Reach’s Artist Series is back with another two twists on IPAs and further collaborating with artist Joel Ebsworth. For the end of 2021, we see two creatures battle it out - presumably in space - in one of the greatest rivalries known to beer: West Coast IPAs versus NEIPAs. There are two advantages to the beers being released in two 500ml tins too; it provides ample space for Joel’s artwork to be showcased, while also means if you buy both of the beers, you’ve got an entire litre of hoppy beer to enjoy (or share) while contemplating that art.

First up is West Coast IPA, a hop machine that’s the larger of the two and contains Centennial and Talus for a big hit of citrus and floral flavours. First up in the golden beer is grapefruit rind that fires forth, while that’s joined by mandarin and a steady note of rose, a touch of bergamot and a bitter finish. Playing the softer side but no less hoppy is the NEIPA that navigates with Azacca and Simcoe and pours pale and cloudy with a tropical mix of lychee and pineapple which are soon joined by pine flavours and further notes of ripe nectarine.