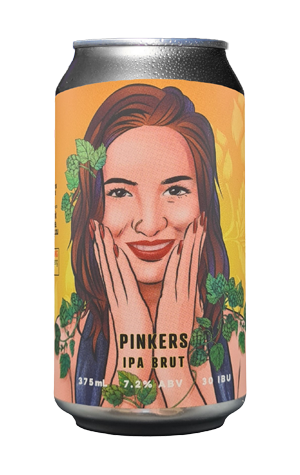 Eden Pink – or Pinkers to her dad – has enjoyed quite the career at Prancing Pony in a short space of time, moving from a front-of-house role to running the brewhouse. Once she realised she'd been at the brewery for one-fifth of her life, she was invited to create her own beer for wider release, one that would not only share her nickname but also feature her likeness on the labels.

The first Pinkers (as there might be more) is tagged a Brut IPA, although as you can read in our feature on Eden, it's not that stylistically tight. Her colleagues have mentioned its likeness to juicy IPAs, while the chosen yeast contributes esters to the overall picture too in a manner that had me thinking of the fuller, sweeter, fruitier wheat beers of Prancing Pony's owners' homeland Germany.

While Brut IPAs are typically stripped back, pale and dry, this hazy amber drop delivers plenty of soft 'n' sweet, biscuity malts with fruity esters that make as much of an impression as the Sabro, El Dorado, Citra and Amarillo hops, creating something akin to tropi-citrus-tinged liquid banana bread, albeit rather drier than I imagine such a creation would be.