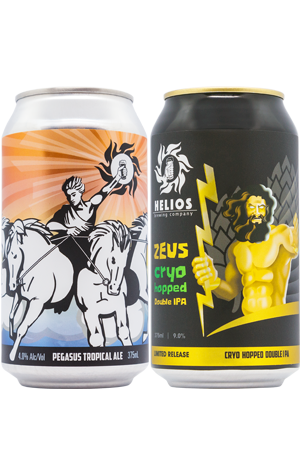 “Generally I stay away from big, popular new release hops. Probably time I tried to dabble in that market and see what all the fuss is about.”

Ah, Charlie. We can’t get too mad at you for sticking with more familiar hop varieties – after all, you always put out crackin’ good beers – but it’s fun to see you playing with a new toy.

For Pegasus Tropical Ale, Helios head brewer Charlie Hodgson toyed with Zamba, a hop blend described as a “tropical dance explosion” of aroma. This hazy pale tastes like a summer holiday – eating a late breakfast with orange juice, slurping on a messy mango, adding a hit of tangy passionfruit to your dessert – while sitting at a summery four percent ABV. And for all its excitable juiciness Pegasus has a quiet wheat body and dry finish, keeping it as soft as an afternoon nap.

Cryo Zeus, on the other hand, is the beer that’ll drive you to take that nap.

After the popularity of 2020’s Zeus Gold – a dry-hopped version of Helios’ regular double IPA – it seemed a no-brainer for Helios to brew another iteration of this beer. In a context where "dry-hopped" often means beers that are "hazy and hardly bitter", Zeus Cryo steps up the intensity. It’s unashamedly bright in appearance, and carries a long wallop of bitterness alongside the citrus, stonefruit and dank flavours thundering across your tongue.

Charlie reckons Zeus Cryo is “probably the best dry-hopped beer I’ve made in Queensland in four years,” and I wouldn’t argue with him. Not only did it suit my taste – a hop lover who’ll happily order a palate-whacking DIPA at midday – but I gave some to a self-pronounced beer-hater and they liked it as well. It’s not often I’d describe a DIPA as a beer for all tastes, but there you go.