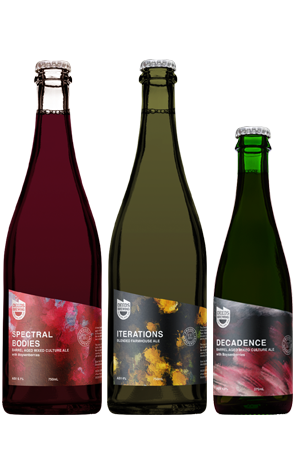 Right at the very end of 2021, Deeds unveiled a project that had been years in the making with the launch of their first trio of mixed culture, barrel-aged blends. You can read more about the project and the man leading it in our Brew & A feature here.

Spectral Bodies is one of two beers in the trio to feature boysenberries and also the most approachable entry point. Because, while the thought of a three barrel blend of mixed culture beer aged in French oak for 12 months then macerated on Boysenberries for seven months, to which was added a portion of oak-aged mixed culture beer and saison, might sound like a recipe for something for experienced palates only, it's relatively straight up and down – even if a million miles from any mainstream concept of beer.

Pouring crimson with a pink head, the berry aromas are so sweetly dense it's reminiscent of Ribena, while acidity is subtle and funk nowhere to be found amid the very berry experience, before an extremely dry finish brings things to a bracing end.

There most certainly is funk to be found within Iterations, a 4 percent ABV farmhouse ale that takes the brewery's Petite Saison as a starting point, adds Motueka, Saaz, Wakatu and Wai-iti hops aplenty, before being blended with a portion of oak-aged mixed culture beer and further dry-hopped with Motueka and Belma. It's the most overtly funky of the three, yet still deals in subtleties: a little lemon citrus character, a little straw, light on the palate, and quenching through and through.

Which brings us to boysenberry beer #2, AKA Decadence: a three barrel blend of mixed culture beer that was aged in French oak for 12 months then macerated on the berries for seven months at a rate of 570 grams per litre. The companion piece to Spectral Bodies has a cab sauv like depth of colour, although presents with fruit characters more reminiscent of a fruity shiraz. A delicate spritziness and a tannic dryness lighten the load and heighten drinkability.