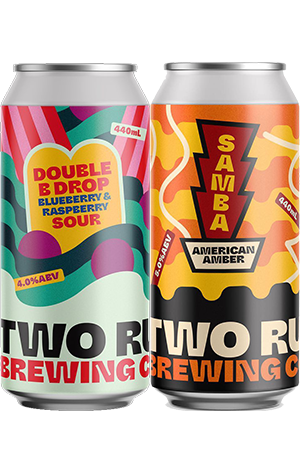 Whenever colourful cans appear from Two Rupees, they often do so in close succession (on a related note: if you aren't up to date, the television show of the same name is an awfully good way to spend COVID-induced isolation). Included in the Melbourne brewery's late 2021 releases was Double B Drop, a sour that lets the two Bs of blueberry and raspberry shine, even if upon seeing the beer you might think it's the latter of those that is doing most of the work, given its pink colour. To taste, while the raspberry does lead the flavour initially and helps spur the beer’s quite bracing tartness, it’s quickly joined by the blueberry playing a more rich, balancing role.

If summer to you is more about hops and malt than refreshing sours, then Samba might be more fitting, particularly given the temperamental weather across the brewery's home state. The American amber features Citra and Galaxy hops to provide a harmony that’ll likely get you grooving if throwback beers are your thing. Pouring copper, the malty notes hit with biscuit and caramel before the lively response of hops bounces back with pine, passionfruit, mandarin and a touch of gooseberry.

NB: Also recently out from Two Rupees at time of writing is Fomo Single Hop XPA; you can grab it from the brewery’s taproom or online here.