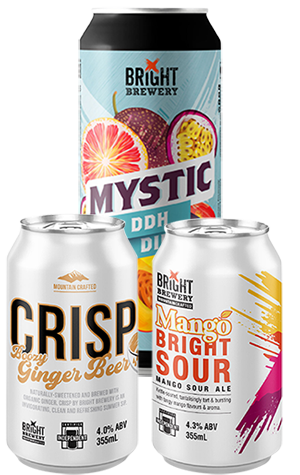 There is clearly no shortage of love for fruit in Victoria’s High Country, with Bright Brewery providing multiple serves as 2021 made the switch to 2022. It seems appropriate then to start with the release that doesn’t actually contain fruit and instead focuses on the root vegetable ginger, with Crisp Boozy Ginger Beer one of 2022’s earliest entrants for drops that do exactly what the name suggests. Brewed with organic ginger, Crisp pours blonde with a light haze and packs in plenty of ginger aroma and flavour, the accompanying bite you should expect in such a drink, and just a touch of sweetness to help it balance out the bite.

As for a beer with actual fruit, Mango Bright Sour is a kettle sour featuring Motueka and Sabro hops alongside the additional mango. It means the flavour and aroma of fresh mango is aided and abetted by further tropical notes from the hops and while there’s a light tartness, it sticks towards the background which makes the beer sit closer to tropical or breakfast juice – or, to be very specific, Golden Circle® Breakfast Juice.

Finally, Mystic is a DDH DIPA that doesn’t actually contain fruit but instead brings a lot of those flavours in with Citra, Amarillo and Mosaic (OK, so at this point we're willing to admit that one vegetable beer, one beer with fruit and one IPA with fruit flavours might not be the massive amount of fruit we led you to believe earlier in this narrative). However, a case could be made that the beer – which is named after Bright's popular mountain biking spot, Mystic Mountain – is the most fruit-forward of all the beers. The double IPA crams in really fresh passionfruit, mango, nectarine and grapefruit thanks to its trio of hops and while there's a lusciousness to the mouthfeel, it's lean enough to steer away from resembling actual juice. It's also decently bitter, with a slight touch of warmth arising from the 9 percent ABV, although with the hops leading the charge so much, that warmth remains very much in the background.

If that’s not quite enough servings of fruit and veggies, keep your eyes peeled for the brewery’s Yuzu Sweetart which is set to return in January, with the beer featuring fruit from Mountain Yuzu from Eurobin.