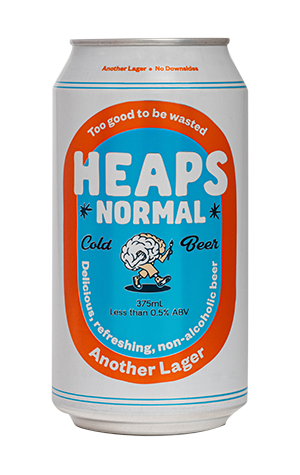 Much like the wider non-alcoholic beer category, the rise of Heaps Normal has been impressive to watch. The brewing company launched midway through 2020 and quite quickly started appearing not just in pubs and regular beer haunts but also in organic grocers, bakeries and has even become the top-selling beer in certain bottleshops. For 18 months, it was really a single beer doing all that work too, with Quiet XPA the flagship at the centre of Heaps Normal's stated aim of getting Australians to think about their drinking habits. But as 2022 kicked off, it was time for a new member to join the brewery’s core and just as Quiet XPA lives up to its name of encouraging mindful drinking and having a quiet drink, Another Lager is a beer designed for the pub or a long barbecue session, or for those moments when you want to keep asking for, “another lager thanks!”, but aren't looking to consumer booze.

The beer is designed to be a classic pilsner, with Another Lager using both Germany’s Hallertau hops and Australia’s Ella for a combination of soft floral and some spice notes. Largely, it's all about keeping things clean and crisp but there's also distinct bready or dry biscuit flavours from the malt base and while there is a light sweetness akin to what you can pick up in many beers in this space, its finishing bitterness balances things out to leave all the classic cues of a pils behind.

Another Lager is available from retailers across Australia from February 1.