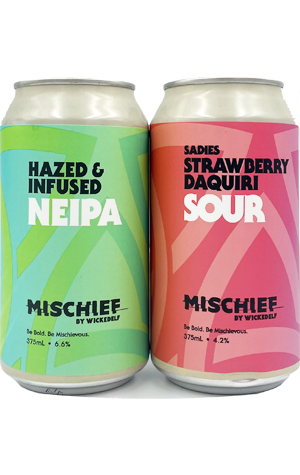 It's fair to say Ryan Nilsson-Linne has been ringing the changes since moving to Port Macquarie to take up the head brewer role at Wicked Elf. Sure, some of the original beers from The Little Brewing Company days remain pretty much the same in essence, even if they're presented differently, but the launch of the Mischief offshoot has injected some contemporary colour into proceedings – and not just in the rainbow-esque labels.

They kick off 2022 with a twin release of beers that are very different to one another, yet similar in the sense they're of their time. Hazed & Infused is a NEIPA that's not only a fine addition to the canon of beer world puns – a reference to the hop variety at its heart: Sitiva – but also a fine take on the style. Sure, we've seen and sipped more turbid looking NEIPAs, and the impact of the hops isn't as cannabis like as some other new varieties, but Sitiva's growers recommend it for such IPAs and you can see why. Here, with Strata and Mosaic in support, the NEIPA’s latent sticky sweetness works with the stone fruit and lime to create a kind of alcoholic liquid gelato with just a little grounding bitterness.

Shifting to the world of cocktails and you have Sadie's Strawberry Daiquiri Sour. Strawberry beers are often subtle in their expression of the fruit, but the addition of lime and the lively Philly Sour yeast ensure there’s little subtle here. Sadie lacks the lurid red visual punch of a daiquiri – it's more Bellini-looking if we’re talking cocktails – but it goes off like a citrusy mini-firework, leaving a wee cloud of booze-tinged funk in its wake.

Plus other retailers here