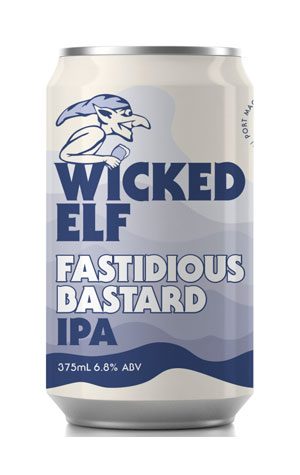 It goes without saying that IPAs are ten-a-penny these days, but it wasn't always thus. Indeed, when The Little Brewing Company that spawned Wicked Elf – initially as a line of beers; latterly as the name of the Port Mac brewery itself – launched their Fastidious Bastard in 2014 it was a relatively rare sight for a brewery's core range on these shores. It drew its influences from American IPAs of that era and earlier too, beers a fair way from the candied, fruitier, less bitter offerings that dominate fridges and tap points today.

And if those gnarlier IPAs are more your thing – if you're of the "keep beers bitter" ilk – then the Fastidious Bastard under the Wicked Elf banner is coming for you. It's hoppy, for sure, but not in the flouncy, fruit-salad-to-the-face sense, more in the spicy, piney, dank sense. Indeed, I reckon you can trace its lineage back to the English IPAs from which the earliest US offerings grew, both in terms of colour and the stewed, sticky malts providing the backbone. That said, don't read that as meaning the beer is sweet – there's a sizeable drying bitterness at play ensuring that while the malts contribute body and texture, their sweeter urges are kept well under wraps. An IPA like they used to be.