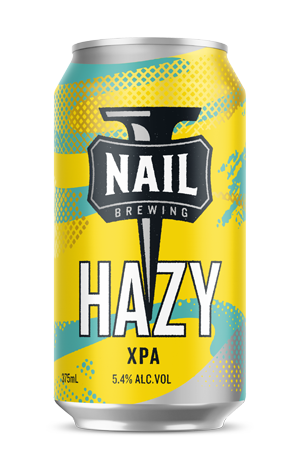 Considering they were the first local brewery associated with the term "double dry-hopped" – and for their Red back in 2014, no less – Nail’s arrival into the foggy realm appears to have taken some time. However, those paying attention will have seen close to ten draught-only, hazy releases pop up on tap from the WA brewing company over the past few years, all part of a process of ongoing refinement that sees Hazy XPA welcomed to their core range in early 2022.

As with most things Nail, there’s a little more character here than most beers of its ilk, all while keeping drinkability front of mind. Sitiva’s peach / lime combo moves throughout – the latter particularly on the nose – and while Nail Hazy looks the opaque part, the moderate body keeps proceedings social, and there’s also reasonable bitterness to boot.

Now, more than 20 years after the release of their first beer, Nail’s future looks hazy.

Available from all Nail stockists from February 23