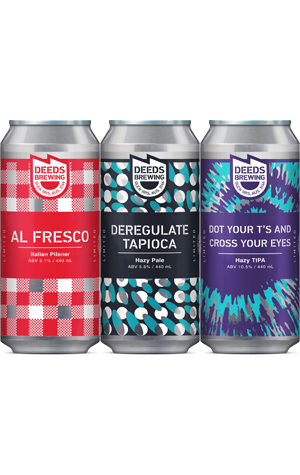 Now, we've made little secret of our fondness for Deeds' lagers over the past year or so, meaning the arrival of a new one always brings a frisson of excitement to Crafty Towers. That said, raising a glass of Al Fresco did lead to a question: "Why release two NZ lagers in a row?" Further investigation reveals it's their spin on an Italian pilsner – dry-hopped more than their European siblings – so it's not technically another NZ version; it's just that the white wine-esque Nelson Sauvin hops are such a dominant force.

It's another super-clean expression of hops within a lager, albeit with something earthier about it than Lexicon – it’s not as shiny and neon as that release, which I'm putting down to the presence of Hallertau Mittelfruh hops in the mix too. In short, however, you've got another lager variant delivered with aplomb.

Now Deregulate Tapioca isn't quite in the same category as Legalize It as a catch cry, but anything that causes a tasting session to detour to the Peter Tosh classic is welcome here. According to the labels, there's no relation between the name and the beer inside – a hazy pale inspired by the discover of some BRU-1 hops in the brewery, and augmented by Eclipse and Citra Cryo. Citrusy curd meets tropical jus meets a flicker of dankness meets smooth mouthfeel and little in the way of bitterness or stickiness, leaving you with an enjoyable beer with a little more liveliness and texture than some in the hazy pale space.

Now, the sampling session ended up with an extended period of Gordon Lightfoot's classic, If You Could Read My Mind, on repeat (it really is as majestic on the thousandth listen as the first), which led to the belated discovery of Rick Beato on YouTube thanks to his orgasmic breakdown of just why the song is so great (which in turn led to his dissection of this epic performance by Oscar Peterson). It's a state of affairs I'm blaming, at least in part, on Dot Your T's And Cross Your Eyes thanks to its double digit ABV.

Moving from Tapioca to this is like stepping up from a two-stroke engine to a drag racer. If the former looks to overwhelm you with its fruity bouquet, here the flouncier edge of the hops do their best to keep a grip – any grip at all – on the rampant, booze-enhanced sweetness. Aromas of a citrusy syrup cake that’s not quite finished baking, complete with some candied fruits and vanilla cream poured over the top (even though none of the hops in the mix are known for such characters), are tied together by a body that's as full and rounded as a hazy TIPA should be.