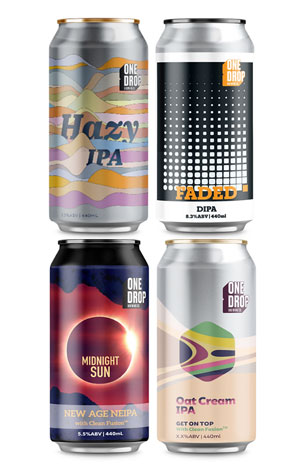 Brewers, as a whole, are always looking for ways to make better beer. In the craft beer world of the early 2020s, much of these efforts are being targeted at ways of making hoppier beers not just better but hoppier too, with Sydney brewery One Drop among those looking to push things forward. They're calling their efforts in this area Clean Fusion, which you can read about in our interview with head brewer Nick Calder-Scholes here.

Equally, you might just like to let your palate do the judging, something they're encouraging with the release of four IPAs featuring said technique. Hazy IPA looks the part and most certainly delivers its hoppiness with a vibrancy: a dense, textural, hops-as-rubbed-pellets, tropical mélange. The bitterness gave my palate more of a workout than I was expecting after reading Will's article – there's a fair bit of grippiness there, but the beers does contain both Vic Secret and Nelson Sauvin, a pair of pretty feisty varieties, after all.

Faded – a double IPA – is the heftiest of the quartet, with One Drop's "Multi-Stacked Oats" approach giving it palate weight, while new hop aroma extract Salvo is used to enhance its, well, aromatics, with Citra, X-33 and Nectaron the weapons of choice. Citrus forward in a manner that's both pithy and crème-like at same time, Faded is clean and possesses a well-judged bitterness. My tasting notes conclude, simply: "Lovely."

That said, for pure drinking enjoyment it's hard to go past Midnight Sun, even if this "New Age NEIPA" might have some quibbling at its appearance: it's more hazy IPA than turbid NEIPA. Ignore such things and what you have is an IPA with zero textural bite, just smooth, silky fruits. Aroma-wise there's a tinned fruit syrupy sweetness propping up the actual fruits; given the hop varieties at play – Sitiva, Talus, Strata, Nectaron, and Bru-1 – can serve up everything from citrus to fresh bud to vanilla and oak to stonefruit and more besides, it could potentially have been a bit of a pick 'n' mix affair, but instead it presents as a seamless fruity whole.

Which leaves the Prince-referencing Oat Cream IPA, a beer they've brewed before but now given the Clean Fusion treatment. It pours with a deeper hue than its stablemates, with the impression gained from one sense is backed up by another as there's a depth of graininess tinged with caramel here that ensures it's not merely a showcase of hops. The oats and lactose fill out the body and add a creaminess to hops that are as much punchy and bitter as they are fruity: sweet tropical and stone fruits are joined by candied berries and something more piney and grounding. In short, there's heaps going on yet it all holds together too.

If you wanted to fully understand the impact of the Clean Fusion process, you'd need a version of each beer that hasn't gone through it, but I'm pretty sure the enjoyment to be found in this foursome will act as more than adequate compensation.