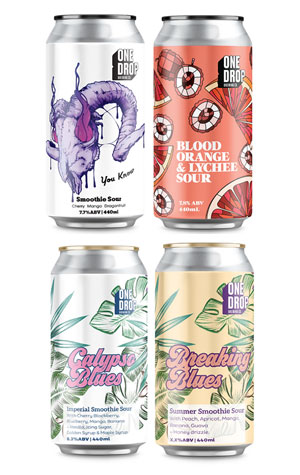 Trying to keep abreast of everything Botany superstars One Drop are doing is an exercise in futility. Take your eyes off them for a couple of days and BAM!, "Here’s another eight new beers plus a new type of hopping technology we invented."

There’s no other way to say this. The four beers I’m about to talk about are obscene. Practically everything single aspect of each beer is a full-scale assault on several senses at once. Take any one of these beers and send it through a wormhole to the 19th century and the havoc this liquid would cause to a genteel society would be catastrophic. One single whiff would be enough to completely incapacitate an entire workhouse of Dickensian orphans. Really makes you think, doesn’t it? No, really, does it? I have no idea if I’ve made a point or not?

You Know Smoothie Sour features some cool ram skull art on the tin so it automatically goes to the top of the list for mine. Billed as a cherry, mango and dragonfruit smoothie sour, it pours an almost indescribably thick amalgam of orange/red with visible pieces of mango purée still in suspension. Almost certainly like every other fruited sour One Drop have ever produced, my first thoughts are with some sort of lolly from childhood. In this case, it’s a cherry Starburst. Although the cherry dominates, the sort of melted ice cream vanilla and lactose smoothie aspect is undeniable. This also mutes the tartness somewhat and makes for an intense and unique drinking experience. To my knowledge, a beer like this is not illegal, but drinking it feels very illicit.

Smoothie sour number two is Breaking Blues. A much more tropical summer breakfast kind of fruit mix with peach, apricot, mango, banana and guava layered on the lactose laden base sour. Looking like a gelatinous fruit nectar purée and smelling like a tropical Weis Bar, Breaking Blues is a totally different experience from You Know. Having five different fruits that don’t dominate like cherry does kind of creates a completely new standalone tropical flavour. If anything, the creamy vanilla goes the hardest of the lot. How it presents might be different but, like You Know, the tartness is mild and the honeyed sweetness lingers.

After the smoothies, it’s time to mellow things out a touch (lol) with just your normal, every day Orange Sherbet Sour. For those playing at home, the lolly equivalent here is obviously an Allen’s Sherbie. Put some freshly squeezed orange juice through a SodaStream and place a glass side by side with a glass of this beer and I doubt anyone could tell the difference. The sheer intensity of orange juice aroma, in particular, almost defies belief. Along with the extra addition of orange purée it means you’ll also find pulp in your glass along with a sharp acidity- Once you get past the orange, however, the sherbet candy really shines through, and with a little bit of warmth, lemon and lime zest takes over at the backend.

Last but not least, we round things out with a quaint little Blood Orange & Lychee Sour. I mean, it’s just a straight up fruited Berliner weisse, right? Bit of blood orange juice, bit of lychee purée, bung it in a wheat-heavy kettle sour. Bingo bango, here’s your light and refreshing sour beer with a fun colour and hints of fruit.

That’s what I’d be saying if One Drop were a normal brewery doing normal, sane things. But as we have just learned, when it comes to their fruited sours, there is no such thing as “a bit of”. I assume around a third of Australia’s entire blood orange crop appears to have been juiced to make this beer. Allegedly there’s a bunch of lychee purée too but the pure citrus-pummelling my face took here made me physically recoil. I’m not even embellishing this for effect, I really did. It’s funny because the aroma has a real bright floral note that beguiles the intercontinental ballistic missile of citrus and acid that awaits.

Again, it’s a drink that’s perfectly legal but there’s an unshakable feeling that it contains the potential for a diplomatic incident...