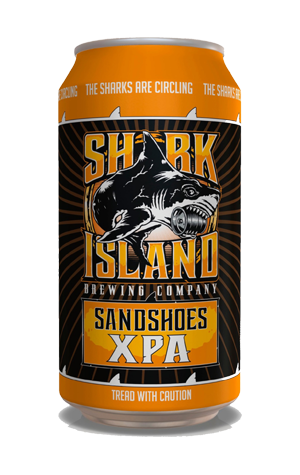 Taking title inspiration from another of their local surf breaks, which itself references the Dunlop Volleys required to reach the break across a cunji reef, Sutherland Shire brewers Shark Island have entered the XPA game with Sandshoes, a new addition to their core lineup.

With an ABV of 4.5 percent and bitterness set to 30 IBU, everything about this beer is as to the point as a Great White. The colour is the colour of beer. It’s that simple; picture amber that has seen a ghost. Upon cracking open the tin, the aromas hitting my nostrils cause me to I think to myself: "Fuck yeah, they sent me a four-pack of this!" And just as well because this is a real potato chip beer; good luck having just one.

Starting with a pleasant, pilsnery chortle, Galaxy hops have been used sparingly to create an easy-going XPA brimming with refreshment and with a humble, lingering finish like the sound of yodelling far off in the distance. This is a crafty can you could open up around your old pop and even he would think it goes alright.

With the Sharkies in the top four and Shark Island releasing session-friendly XPAs, it feels like good times for The Shire. Enjoy!

Launching at the brewery on April 14