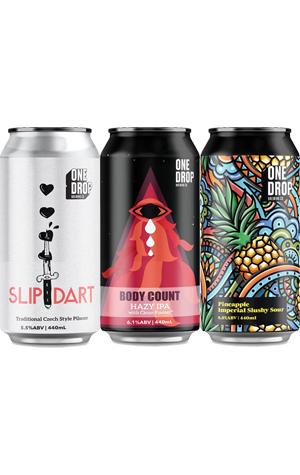 I recently wrote about some of the more extravagant One Drop releases, so figure it’s probably time to even up the ledger a bit with something a little more within the realms of normality. To that end we’ve got a gorgeous Czech pilsner, a hopped up hazy and – checks notes – a pineapple imperial slushie sour. Well, two out of three ain't bad...

I’m always excited to see breweries take on a Czech pilsner. With more malt than a German and less hop than an Italian, a Czech style for me is the vanilla ice cream of the beer world. Deceptively simple but with the capacity to be extraordinary and a real test of a brewer’s lager mastery. Here, One Drop managed to produce a gorgeous example of the style in Slip Dart.

Pouring a dazzlingly clear golden with cumulus like white head that delivers a stellar lacing around the glass, Slip Dart produces plenty of noble hop character out of the glass. Herbaceous spice and a pronounced floral note indicates perhaps a decent whack of late hopping. There’s also the traditional bready pils on the nose and a mild doughy sweetness. Hefty bitter bite up front with a moreish, lingering bitterness is rounded out by a crystal clean finish.

Body Count is another One Drop IPA brewed utilising their very own hopping technique, Clean Fusion. This time there’s a very cool hop combo of Melba, Strata, Vic Secret and Nelson Sauvin. With most of these having pretty distinctive profiles in their own right, I was very keen to see how they played together.

Looking like a textbook hazy IPA, Body Count blasts out of the gate with massive passionfruit and earthy pine aromas. This continues on the palate with some pineapple sneaking in and tongue-gripping bitterness that I wasn’t quite expecting. A bit of wheat malt comes through but clearly this is all about the hops. It’s a clean but bracing bitterness and, honestly, it’s cool to find that in what I had incorrectly assumed was going to be a more juicy affair.

The Pineapple Imperial Slushy Sour should tell you pretty much everything you need to know about the last of the new One Drop releases. Somehow I doubt there’s ever been another can of beer that recommends a couple of hours in the freezer before opening but here we are. Honestly, it’s fun and silly so who could argue with that?

The expression of pineapple in this beer is absolutely out of control. This is an imperial kettle sour base brewed with pineapple juice, purée and more purée added during packaging. Pineapple juice, canned pineapple chunks, canned pineapple syrup, the white Golden Circle poppa, sour pineapple lollies, pretty much any iteration of pineapple you’ve ever had, you’ll be able to find it here. I might be wrong but there’s so much pineapple that I think there’s still a bit of bromelian. Bromelian is the corrosive enzyme that gives fresh pineapple the prickly acidity that’s actually just the protective mucus in your mouth being dissolved, which accentuates the effect of the acid. In any event, the tartness is prickly and justifiably intense with a mildly sweet finish.