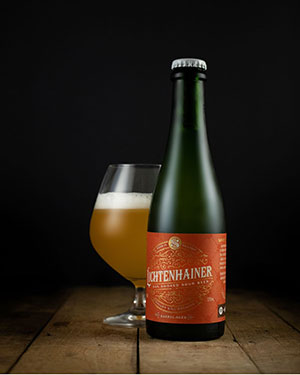 When it comes to beer and cider releases, you could never accuse Dollar Bill of not following their own path and this core range beer, introduced into their lineup in 2022, is a perfect example of that. Even with so many beers across myriad styles being so frequently released in Australia, Lichtenhainer remains a rarity, with the German ale's unique combination of smoke and sour not often brought together locally.

Dollar Bill’s take on the historic style sees the brewery use oak-smoked wheat and pilsner malt before fermenting it in French-oak barrels and dry-hopping with Nugget. With a pale and cloudy colour, Licthenehener most closely resembles a traditional English scrumpy cider, but rather than being greeted by an aroma of tart apples, it's instead smoked beechwood and bacon that welcomes you in. That smoke however, is quite quickly washed away with tart lemon zest and quite sour, overripe tropical notes.

Picture taken by the highly-talented photographers at Beer.2.Review, whose work you can view here.