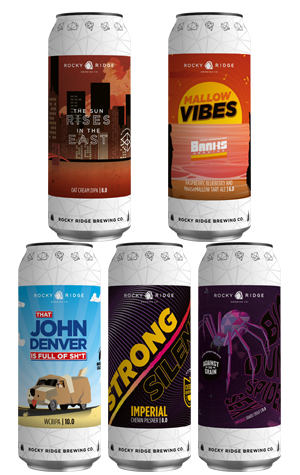 Rocky Ridge turned five in April and could we have expected them to do anything less than release five entirely unique collaborative beers that span the spectrum of craft beer styles from around Australia – even squeezing in a trip across the Pacific Ocean to little old America.

With five years of experiences and plenty of trial and error, the Rocky Ridge team and their respective collaborators didn’t hold back, either. In true celebratory style, all five feature excess of some description, from fruits and oats to ABV and hops…

The Sun Rises in the East is a textbook oat cream IPA designed with Brisbane-based Range that's bumped up a notch to 8 percent ABV but still touts impeccable balance; a sweet undertone supports subdued but clear citrus and pine character, plus a long, semi-sweet finish.

Mallow Vibes (6.0%), on the other hand, is Hubba Bubba-esque, with this Banks Brewing collab possessing sweet and fruity aromatics to match. Its thick, strawberry syrup character is backed by a natural fruit sweetness that also features a generous level of tart and a long, ripe berry sweetness in the finish.

Heading to the West Coast in the company of Mountain Culture, and *That John Denver is Full of Sht** is pure WCIPA spec, with a touch of heat courtesy of the 10 percent ABV. Prickly pine, stone fruit and guava all feature alongside a firm but well-placed bitterness. Bitterness and pine linger on the lengthy finish, too.

The Strong Silent Type is a curious brew conceived in cahoots with Deeds. Labelled an "Imperial Chenin Pilsner", this lager/wine hybrid is dominated by herbal aromatics from German hops and rich bready/biscuity notes thanks to Pilsner and Munich malts. Though its 8 percent ABV is noteworthy, it barely registers on the palate, where a balanced malt and hop character is free to shine against a drying finish from the chenin blanc juice.

Which leaves Against The Grain collab Big Dumb Spider Sex (11.0%), which is thankfully just a name rather than a description of some GABS-esque adjunct. The beer is a boisterous oaked imperial stout for which no real explanation is required. Marshmallow, vanilla, coffee, cocoa nibs and a trio of oak variations are layered on top of a complex grain bill while an eight hour boil yields an exceptionally rich and long-lasting stout in which chocolate and vanilla feature very heavily.