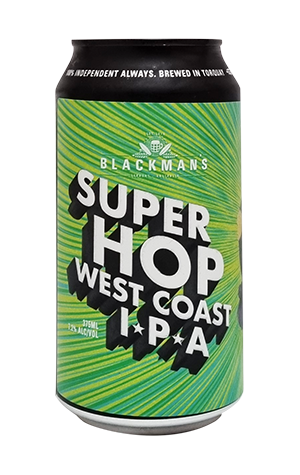 They never seem short of new IPA ideas at Blackman’s Brewery but even with beer drinkers and brewers constantly on a quest for the latest and greatest hoppy beers, it can be good to return to an old favourite. Super Hop is a West Coast IPA that was the first beer released under the brewery’s “Same Day IPA” banner in 2019 which saw kegs and cans delivered to Victorian venues and bottleshops the same day they were packaged. It's a release that certainly impressed too, securing a gold medal at the Australian International Beer Awards which makes it one of multiple beers that helped the Victorian brewery take out the Champion Small Australian Brewery that year.

Now three years on, Super Hop has made a return to this earth and while it isn’t a same-day release, given those judges didn’t drink it mere hours after it was packaged, we can rest comfortably knowing you don't have to crack into straight off the line. Whenever you get your hands on one, of you're a fan of ultra-lean West Coasts, Super Hop is the kind of beer that will more than likely scratch that hoppy and bitter itch. It's as lean and as bitter as they come, while the hop combination of Centennial, Simcoe and Citra provide grapefruit, resinous pine and further hits of nectarine and pineapple.