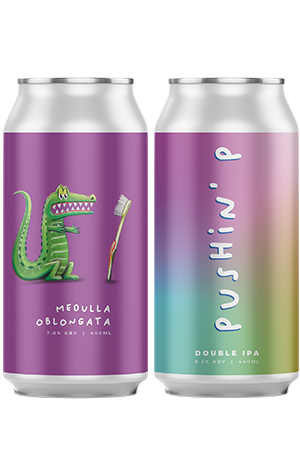 We might need to check in with Braeside Brewing – there seems to be some kind of generational clash occurring at the Melbourne brewery. Medulla Oblongata is a hazy IPA featuring all Australian hops and malts and, given the crocodile on the can, the beer’s name is quite clearly inspired by the pinnacle of comedy for many Millennials, 1998's Waterboy. Featuring the twin combination of Galaxy and Eclipse, the hazy IPA produces quite a sweet aroma of peach juice while the flavour leans more towards passionfruit, mango, mandarin zest and a somewhat prickly bitterness.

Then in Gen Z’s corner is Pushin’ P, which – and this is something of a confession from a Millennial beer writer – apparently means keeping it real. Even though the term is a TikTok trend, there’s nothing too modern about Pushin’ P; this is a chewy, throwback DIPA that features Simcoe, Citra, Centennial and Chinook. It pours a fair bit more orange than most modern IPAs and it delivers quite a wave of caramel and toffee, plus pine, grapefruit and a big bitterness from the hops, there to balance the beer’s quite rich side.