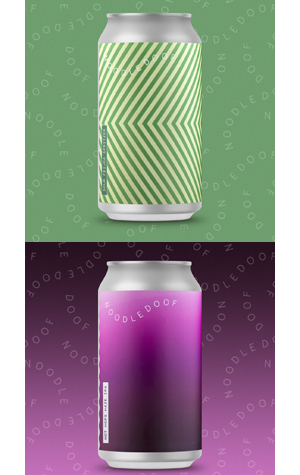 Over summer, Noodledoof were one of 27 Aussie breweries invited to create beers for the NZ Hops Great Brew Challenge, and they return to that territory in May with this "spritzer" featuring both a heavy dry hop of famed Kiwi hop and 100kg of imported NZ feijoas. Both make their presence felt in Sour Feijoa Spritzer, which appearance-wise sits somewhere between a traditional lemonade and a pineapple juice and delivers the refreshment of the former. Not that it’s about lemons at all, however, which makes that a rather crappy piece of commentary. The tropical fruit character comes through cleanly with the Nelson Sauvin merely aiding the tropical vibe while adding a touch of grippy bitterness.

For Hot Hop Haze IPA – not a beer designed to be consumed hot, but one featuring some of the hotter hype varieties around – they went large on Strata and Zappa from the States. And while it's light on the haze, it's anything but light in hop character. Zappa takes the lead, dropping its funky neomexicanus rhythms all over your olfactory system. Sure, the vibrant juicy fruit-meets-hydro of Strata can be found if you go looking, but the wild, herbaceous, drying, spicy, twisted citrus rind madness that is Zappa leaps from the glass and is still Sheiking Yerbouti long after the last sip has passed.