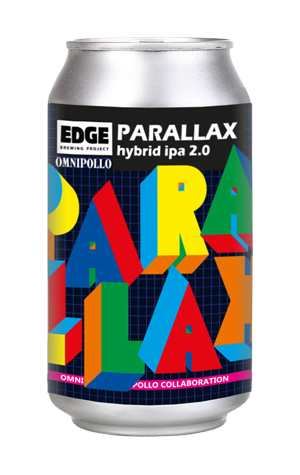 IPAs aren't usually beers that are a long time in the making; brewers and punters want them out of the brewery and down throats while they're nice and fresh. Yet here's one that's been seven years in the making...

The story begins when the team at Edge Brewing Project travelled to Omnipollo with some Aussie hops in their luggage to brew an IPA. That beer was Parallax, and now – in time for Pint of Origin 2022 – a new version has appeared, ready to be launched at Beermash as part of their Scandinavian tap takeover.

Omnipollo's first Aussie collab is tagged a "hybrid IPA" as it's designed to sit somewhere between a West Coast pale ale and East Coast hazy. And it's fair to say they've not just nailed that brief but delivered a mighty fine IPA at the same time. It pours a gently hazy peachy-orange hue and is juicy as from aroma to palate: mandarin and stone fruit and all manner of tropical goodness delivered with a vibrancy and cleanliness that’s a joy to drink. Bitterness is present but wrapped in so much fruity juiciness it’s easy to forget.

They didn't make much, and it goes down a treat, so if it sounds like your kind of thing you probably don't want to ponder your purchasing decisions too long...