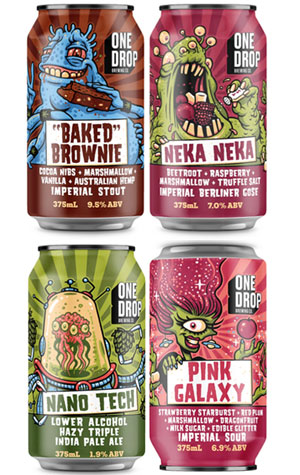 I don’t know about you, but I’ve been waiting for GABS to come around just so we can see all these straight-laced breweries finally have a bit of fun. The news that staunch traditionalists One Drop had temporarily ditched their strict adherence to the BJCP style guidelines to indulge in a bit of GABS silliness sent me into a tither. Finally, finally! We all know they can nail a lager and a pale, but now we’ll get a glimpse into what happens when the One Drop team allow themselves to experiment a bit with a monster-themed four-pack.

Let’s start with something light, shall we? Neka Neka is a 7 percent ABV imperial gose that’s been dosed with raspberry purée, beetroot juice, marshmallows and black truffle salt. It’s certainly not the first time these ingredients have appeared in beers, but I dare say it’s the first time they’ve all made an appearance in the same one.

Neka Neka pours and smells precisely like a pink creaming soda. A vivid deep pink with a frothing pink head and aromas of raspberry, vanilla and pink marshmallows. If you’re expecting this theme to continue on the palate, then I’m afraid you’re in for a bit of a ride. As soon as this beer enters your mouth, a switch flips from sweet and fruity to earthy salinity. The beetroot takes most of that sweet raspberry character out behind the shed and delivers both barrels. The deep, earthy beetroot marries with a prominent salinity to create almost a completely different beer. There’s a hint of a jammy lactose finish but, overall, I’m not sure I’ve ever experienced such a profound difference between aroma and flavour.

I’ve mentioned it before, but so many of One Drop’s beers instantly teleport me back to a childhood memory of gorging on one lolly or another. In the case of Pink Galaxy, it’s strawberry Hubba Bubba. It’s my first thought with my first whiff and for the entire experience I can’t shake the feeling that I’m drinking liquid bubblegum. Pink Galaxy is like the first few blessed chews of Hubba Bubba when the strawberry, citric acid and sugary sweetness are present in juicy abundance. If you look a bit harder though, there’s also a really lovely undercurrent of plum that helps carry the bright silliness above. A genuine delight in every way.

Once upon a time, the only time you could find a big pastry stout was at GABS. Turning a dessert into beer has been a winning strategy for pretty much all of GABS history, so it’s great to see One Drop try something a little different in that vein. “Baked” Brownie is an imperial stout just shy of 10 percent ABV brewed with cocoa nibs, marshmallows and vanilla, then finally conditioned on hemp by-products. One could be fooled into thinking One Drop are implying some sort of mutually beneficial relationship between chocolate brownies and hemp here, but I’m not sure I could possible speculate on what that is.

“Baked” pours almost as thick as brownie batter and smells like a glass of melted cookies and ice cream. Chocolate cookie dough and vanilla abound throughout, however the introduction of the hemp complicates things somewhat. On the palate I get Scotch whisky, milk chocolate and a herbal Jägermeister edge. It’s weird at first, but it works.

Finally we have Nano Tech, which is most likely the most difficult of the four to pull off. Oxymoronically labelled as a low alcohol hazy triple IPA, Nano Tech is a 1.9 percent ABV IPA wearing the costume of an 11 percent ABV oat cream monster. Trying to create the impression of a huge IPA without the alcohol and malt to lay the foundation seems like a tremendously difficult task and you gotta respect One Drop for having a red hot go.

It definitely smells like a big hoppy monster. With an aroma like jamming your face into a foil bag of T-90 pellets, we’re off to a good start with sweet mango, pineapple and mandarin dominating. The palate is lactose sweet and heavy on hop compounds to create a moderately bitter oat cream-like body. The sweetness and biting bitterness does a great job of hiding the relative lack of alcohol and while it doesn’t quite taste like a triple IPA, I reckon I could be fooled into 6 percent-ish.