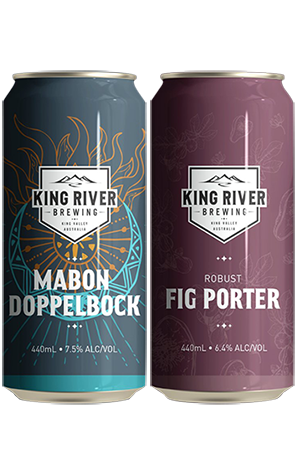 Hopefully, it’s a phrase used by a lot of brewers but those words seemed particularly heartfelt when spoken by Nathan Munt at the most recent Australian International Beer Awards. The King River Brewing cofounder had just won the Best Amber/Dark Lager trophy for his latest Mabon Doppelbock and the major award feels so fitting for a brewer who holds such a love for classic European styles. The strong and malt-driven lager isn’t one often made by Australian brewers but this 2022 release brings good fortune for multiple reasons, including the fact that you can still buy it, it's being rebrewed, it's a touch boozier compared with last year and it comes in larger 440ml cans. The name is inspired by the pagan harvest festival known as Mabon and the rich beer would be the perfect companion to any feast. Pouring with a deep red hue that nears on black, there’s plenty of sweetness at play in the shape of toffee and caramel along with a distinct bready touch of freshly-baked rye and spiced notes thanks to the inclusion of classic Euro hops.

Also out in larger cans is King River’s longstanding Fig Porter, which takes some 85 kilograms of figs grown on the brewery’s Whitfield home and marries them to a robust porter recipe. The result is a distinctly rich fig aroma that looms large over a mix of chocolate, espresso and the softest touches of burnt toast for a harvest beer that's perfectly suited to winter.