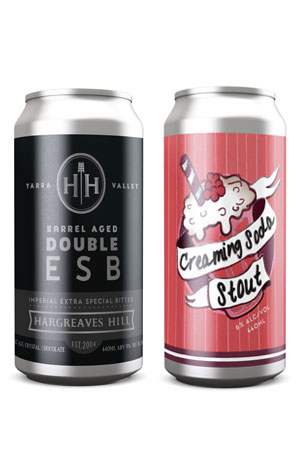 Given they're arguably the only brewery in Australia for whom an ESB is their best-known beer, it's perhaps a little odd Hargreaves Hill haven't played around with the more over the years. Still, as winter 2022 unfurls its icy tentacles, it looks like they're going to make amends.

First up is this Barrel-Aged Double ESB, one that has seen them not just ratchet the base beer up to 9 percent ABV but also give the liquid time in both ex-brandy and bourbon barrels. Well, if you're going to play around, why not go all out, eh?

It's also fair to say there's as much going on as that suggests. The sultana fruitiness of a rich English bitter is intensified amid wafts of bourbon sweetness and a more spirituous brandy top note. It feels like something suited to the equivalent season in the Northern Hemisphere as its aromatically like walking through the cake and glühwein aisle at a winter market. The barrels have given it boozy warmth too that, along with some overripe banana on the palate, make it as reminiscent of a Belgian ale as a souped-up ESB. It would be fascinating to see how it goes next to the straight double ESB that's set to follow.

The Yarra Valley brewery’s other June release goes back to a year when only the bats cared about COVID: 2018. Creaming Soda Stout was first made for Bendigo On The Hop where its combination of raspberry, vanilla and lactose saw it take out the People’s Choice Award. Four years on, with a slightly reworked recipe, it combines a very smooth body with a syrupy hit of raspberry, further sweetness in the shape of creamy vanilla, and gentle layers of roasted malt and chocolate.

Both available from June 17