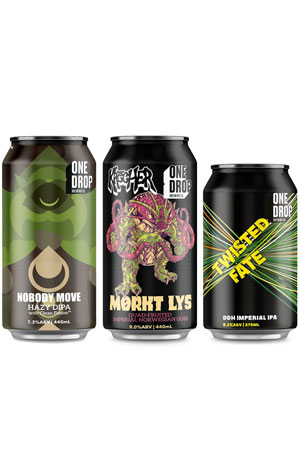 After all the GABS monster-themed craziness, Sydney wizards One Drop have taken off the giant pointy hat covered in stars and replaced it with something much more circumspect. Yes, it’s still pointy and, yes, it’s still got some stars on it and, sure, it does seem to be leaking some sort of thaumaturgical mist, but there’s a clear de-escalation. We’re talking a couple of big IPAs and a collaborative imperial gose that, while still vaguely threatening, there’s certainly less risk of being turned into a newt should you drink it wrong.

Nobody Move is a hazy double IPA clocking in at 7.3 percent ABV and is the latest in the line boasting the use of One Drop’s Clean Fusion process. They’ve also included the use of a type of liquid hop product called Spectrum which is used in the dry-hopping process in place of hop pellets. What does that mean for you, the average beer drinker? I’m not entirely sure but it’s Mosaic and everyone likes Mosaic so what could possibly go wrong?

Nothing at all, it turns out. Even with Amarillo, Citra and Strata in the mix, the big Mosaic mango stands out. There’s also some tropical citrus and passionfruit but the mango wins the day. Oftentimes, bigger ABV hazies can be a bit sweet but that’s not the case here. The oat-laden malt is silky smooth and substantial but finishes fresh and dry. Bitterness is moderate, with a sherbet-like hop character that's very clean and avoids the mouth-coating resinousness from all those high alpha hops.

The second of our big IPAs is a re-release of One Drop’s DDH Imperial IPA, Twisted Fate. This big, old school IIPA first graced us a couple of years ago but this newest version has received the Clean Fusion treatment too, so why not give it another crack?

Firstly, this beer looks like the apotheosis of a West Coast IPA. Dazzlingly golden with long-lasting white head, pine, lime, lemongrass and hard candy explode out of the glass in a dizzying promise of what’s to come. The rock solid malt foundation is crisp and holds up well to the piney, dank bitterness on top. It’s not actually as bitter as you’d expect it to be, but it’s absurdly drinkable for a 8.2 percent ABV IPA. A fantastic modern IIPA.

Well, with that all out of the way, this is really why you’re here, I assume? Mørkt Lys is a collaboration with One Drop’s Norwegian counterparts, Krecher, which was brewed as part of Beermash’s Pint of Origin celebration of Scandinavian beers. Billed as a quad-fruited Norwegian gose, I’m sure you probably instantly know if this beer is going to be for you or not. Also the can art is very cool.

Mørkt Lys pours an almost black, deep purple/red and contains additions of mango, blackcurrant, passionfruit, bilberry (similar to blueberries), salted caramel, black lava salt and European squid ink. First impression is that it smells like a mixture of Ribena and cake batter. This progresses into a flavour that I could only describe as Golden Pash fruit juice, blended with fruits of the forest jam and dusted with Maldon flakes. Good heavens.

And other One Drop stockists