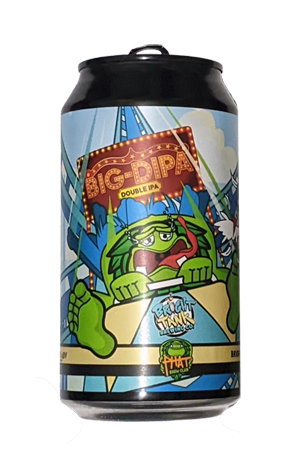 Roll up! Roll up! The amazing loop-de-loop that is Bright Phat Tank’s hop roller-coaster awaits you! It’s double dry-hopped, it’s dip-hopped, it features five hops, and it’s guaranteed to send your palate on a journey of maximum lupulin force!

Ladies, gentleman and children over 18, this here beer is an old school East Coast IIPA, well, at least in the sense of East Coast IIPAs before that term took a turn for the hazy. Feel its C hops pop! Be wowed by Zappa’s brusque flair and cooed by tropical Citra, while the star slowly rises through the glass. Her name? Talus!

This siren provides an alluring sashay of creamy pink grapefruit – if that's a thing? – and firm bitterness, but nothing of the gnarly neomex kind courtesy of said dip-hopping. Folks! The result is a "rounded bitterness" – not firm, nor slight – all familiar, but with enough swagger to carry its "Double IPA" credentials, not in the least due to a lingering dry finish (provided you didn't spill your beer on that final, twisting loop).†

†The Crafty Pint strongly advises against imbibing DIPAs while on roller-coasters.