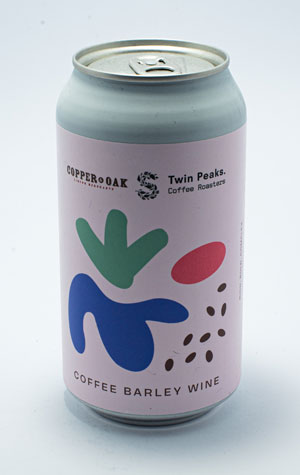 Collaborative brewing seems to be an ever-growing theme within the Western Australian brewing scene. From within the confines of certain regions and brewery friendships to the more fringe (say, Shelter Brewing x Hillzeez surf shop, for example), collabs seem to go hand in hand with craft beer in the state. It may be due to the expansive land mass that is WA (there’s almost 2,400 kilometres between the state's most northerly and southerly breweries), but whatever the reason one of the latest such beers to grace our shelves is the three-way between The Seasonal Brewing Co, Copper & Oak and Twin Peaks Coffee.

They’ve hit punters with a coffee-infused barleywine ready for winter warming. The not so common combo is a bit of a diss on the classic imperial stout x coffee narrative, with the coffee chosen specifically to complement a malty, toffee driven base beer. Move over familiarity, we’re in new territory.

If a coffee-infused barleywine sounds weird, then you’re going to enjoy the fact this one was made using the poly-gyle process: it's a two-part process where once the wort is mashed and boiled, that liquor is then returned to the mash tun for a second mash and boil, yielding a high gravity, malty base beer. To this, a fruit forward, cold brew coffee concentrate was added before a coffee dry hop also took place. Brazilian and Burundi sourced beans were the beans of choice, yielding fruity, jammy characters. Modest additions of Lotus hops complete the picture, imparting some orange and vanillin notes.

This collab offers a different spin on the familiar barleywine as orange, praline and a light, fruity coffee character all combine upon a decadent and dense toffee, and sweet malt base to delicious effect.