Beer Molly Rose Evolution Saison & Prickly On The Outside 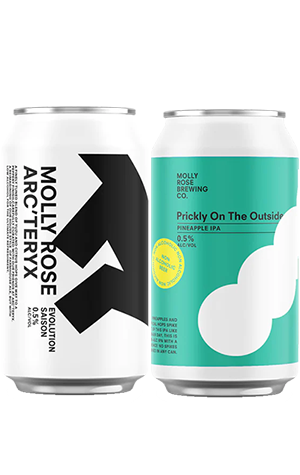 If you’re a craft beer fan keen to cut back on drinking, there’s certainly never been a better time when it comes to choice. Molly Rose are among the breweries making that so too, with the brewery releasing two very different non-alcoholic collaborations. Evolution Saison was brought to life with the crew at Arc'teryx and while a partnership between an outdoor-focused, Canadian clothing brand and a small Melbourne brewery might feel a little unusual, dig a little deeper and there's a lot that combines the pair. The founding principle of Arc'teryx, is to always challenge, test and trial new ideas before ensuring their final products stand the test of time. OK so maybe you don't want Molly Rose beers to last a lifetime but on each other point, there's a similar ethos at the brewery's core, while the two businesses share a commitment to sustainability and trying to bring a more diverse crowd into their industries too. With Molly Rose non-alc beers already a feature of Acr’teryx events, the clothing company crew were keen to develop a beer with the brewery. The result is a saison that includes a blend of yuzu, citrusy hops and spices for an incredibly refreshing farmhouse ale filled with distinct yuzu, lemon peel, cloves, pepper and jasmine. If you’ve just been on a trail run (or any run for that matter), ditching the Gatorade and switching to this would be a wise move. Ditch the cheap shoes while you're at it too - they won't last and will wreck your joints.

Joining that beer is a non-alc collab with Blackhearts & Sparrows, Prickly On The Outside. The Pineapple IPA, uses loads of fresh pineapple and Strata hops to create a beer that piles tropical flavours atop an incredibly lush and hazy base. Although a cocktail and alcohol-free beer feel like they should be words apart, such is that tropical swell that drinking this beer not only resembles a Piña colada, but it also feels a little like the holiday you were on the last time you drank one.