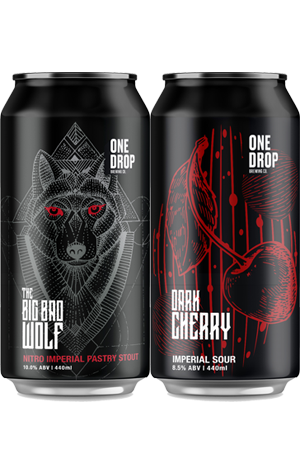 As part of their Dark Souls Winter Solstice event, One Drop revisited a couple of past beasts designed to bring sustenance in the cooler weather – albeit in very different manners. Both are, in typical One Drop fashion, on the larger side in terms of booze, and pack plenty into their tins.

The 2022 version of The Big Bad Wolf is a 10 percent ABV, nitro-enhanced imperial pastry stout to which was added "copious amounts of chocolate and lactose" while spending months on French oak, as well as Slovenian Wolf hops from which the brewers aimed to pull blackberry, violet and elderflower. And, boy, is this one luscious delight or what? The nitro shake 'n' pour delivers a dense, creamy head à la Guinness or Kilkenny, while sweet red berry aromas escape from the creamy chocolate before you're met by a pillowy rush of fruity jam, a little spice, and more of that creamy chocolate – so, so creamy (did I mention it's creamy). I could go on, then I realised it's essentially Arnott's Royals biscuits in beer form, so I'll leave it there.

Mick Wüst gave the imperial sour Dark Cherry the full treatment when it first appeared in 2020; two years on, it features 200g/L of dark and sour cherries added during fermentation – left to rest on their skins for two weeks. Unsurprisingly, the cherry character is both upfront and intense, flitting between tartness and a cordial-like sweetness. My only regret is I didn't keep any of The Big Bad Wolf back to try them in the same glass.