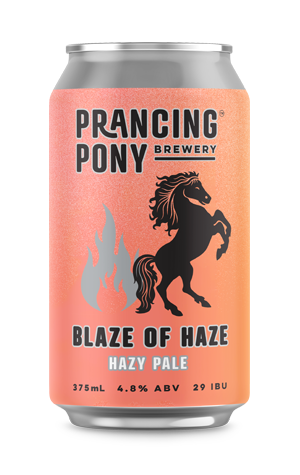 Prancing Pony have brewed plenty of beers at their Adelaide Hills home that showcase hops and haze, doing so in all shapes and sizes too, including some of the chewier imperial IPA variants we've seen. So when they announce a new release called Blaze of Haze for which they've employed hops in LUPOMAX form, you'd be well within your rights to gird your loins for another potent beast. However, this isn't that: instead it's a beer blazing a trail to the part of your drinking repertoire marked “session”.

Pale and hazy, it brings vibrant tropical and candy-esque berry and citrus hops from start to finish. Light in body and pretty soft on the palate, Blaze of Haze is low in bitterness, leaving a softly sweet fruitiness in its wake, and becoming a very enjoyable addition to Prancing Pony's core lineup as it does.

NB Crafty readers can enjoy 15 percent off cases until July 8, 2022. Head here and use the code craftypint when prompted.