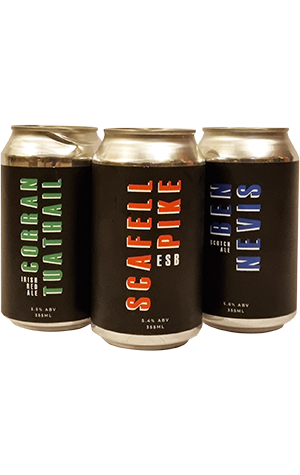 When breweries come together for collabs, it’s often favourite or novel hops that end up being at the centre of any releases but Braeside Brewing have followed a different path. Their three-part Expat series sees them instead champion malt and classic styles from the British Isles, with each beer named for the highest peak in each locale. Brewing the beers for winter was an easy choice to make too and was driven by Braeside Brewery’s own love for those classic beers as well as the fact their home in Melbourne’s south-east has a substantial population of UK ex-pats.

Corran Tuathail is an Irish Red brewed with the team at Ellerslie and the beer pours a deep red colour while being filled with rich flavours of raisin and caramel. Joining those are more toasted notes of freshly-popped bread or sweeter brioche brought straight out of the oven, with Corran’s peak a dry finish.

Scafell Pike is an Extra Special Bitter brewed with the maltsters at Voyager and 3 Ravens - a fitting style to pick given one of Ravens’ classic core range members was the British pub classic, English. It’s also the spot where Charlie Tompson brewed before taking the reins at Braeside and together with the Ravens brewers, they’ve created a beer that’s just as destined to be enjoyed in a pint glass as English ever was. The ESB is highly sessionable with a mix of bready and biscuity malt flavours, spiced, floral and earthy hop notes, a touch fruity yeast esters and finishes with a lingering bitterness.

Finally, that brings us to Britain’s highest peak, Ben Nevis. The scotch ale saw Braeside come together with Hobart’s Shambles Brewery for a malt-driven and rich beer where coffee, caramel and toffee make it feel like the perfect winter ale for one of Melbourne's coldest ever nights.